Alfred Kärcher, like Robert Bosch, Gottlieb Daimler and Graf Zeppelin, was one of the inventors and entrepreneurs from Baden-Württemberg, operating at a time of intensive industrial development. In 1924 he graduated from the Technical University of Stuttgart and started working in his father's engineering office. In 1935, he registered his own company in Bad Cannstatt and started selling products related to heating technology. He also designed and constructed, according to his patent, a furnace for hardening salt baths.

In 1939, the company moved to Winnenden, where it still has its headquarters today. At that time, the company also produced equipment for heating aircraft engines and cabin heating systems. After World War II, production focused on the production of urgently needed household appliances: e.g. waste bins or tanks welded from ammunition casings, as well as heating stoves and stoves. In the post-war years, using the experience in the production of steam generators, the company developed a bus heating system, first for the American market, then for Europe. The heating system was introduced to the European market in Volkswagen cars in 1952. In the 50s, the company also produced car trailers, truck trailers, frames for wheeled vehicles and even hand carts, trying to maintain production and constantly looking for its place in the market.

Alfred Kärcher did not live to see the global success of his company. When he died on September 17, 1959, at the age of 58, his wife Irene took over the management of the company. Today, the second generation is responsible for the company, i.e. their children: Johannes Kärcher and Susanne Zimmermann von Siefahrt.

In 1962, Kärcher established its first foreign subsidiary in France, followed by Austria and Switzerland. International activities began to gain momentum. In 1975, the company opened a factory in Brazil, and 10 years later it had 16 subsidiaries in North America, Africa, Australia and other countries. By 2012, Kärcher was represented by subsidiaries in 57 countries, which generate 85% of foreign sales. 40,000 customer service points in more than 190 countries around the world provide comprehensive support for Kärcher users worldwide.

In 1974, the company returned to the production of high-pressure equipment for good. During this period, the color of the devices was changed from blue to the known and associated yellow to this day. In 1980, Kärcher expanded its product range to transport and construction. Step by step, universal vacuum cleaners, sweepers, scrubber-dryers, car washes, evaporators, water treatment systems and cleaning agents appeared in the offer.

A milestone in Kärcher's history was the introduction in 1984 of the HD 555 profi high-pressure unit – the world's first portable high-pressure device and the further development of the consumer market. In 1993, the offer was extended to include steamers and steam cleaners prepared for households. In 2003, the company presented the world's first fully automatic robot vacuum cleaner – RC 3000. In 2007, Kärcher started operating in the garden goods segment with the launch of garden pumps and accessories.

In 1986 Kärcher started selling a unique roller brush for professional automatic scrubber-dryers. With the development of the new dirt blaster in 1995, the cleaning efficiency of high pressure has almost doubled. The suction of vacuumed dust in professional universal vacuum cleaners was systematically improved and in 2007 led to the presentation of an innovative filter cleaning system – Tact. New cleaning procedures have been developed in cleaning projects around the world: 284 columns in St. Peter's Square in Rome have been renovated using a specially developed spraying process on a total area of 25,000 m². Since 2009, Kärcher has been offering ultra-high-pressure units that supply water pressures of up to 2500 bar. In the same year, multi-purpose municipal tool carriers were presented, water dispensers went to new target groups.

Innovation has been and continues to be the most important factor in Kärcher's development. In 2011 alone, more than 100 new products were presented.

AW-Tools is an authorized distributor of the KARCHER brand. 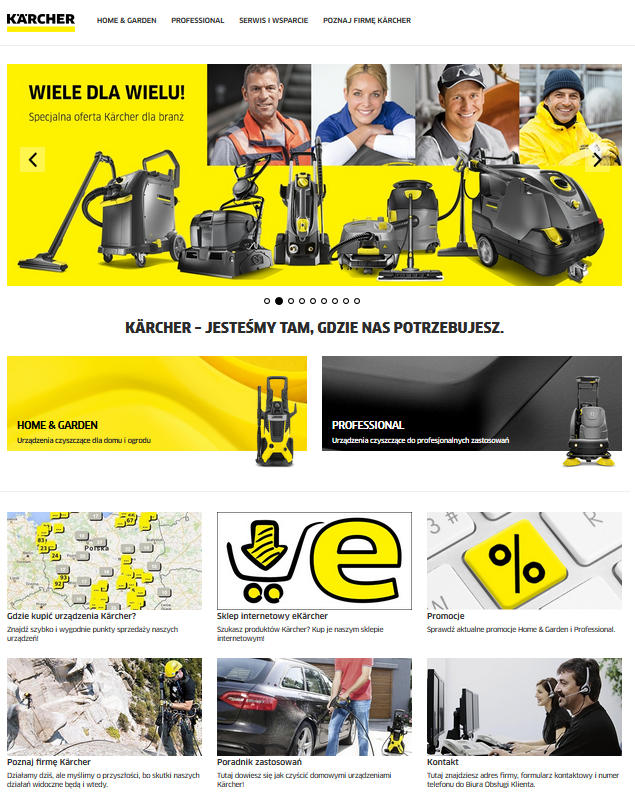